It’s a simple, often innocuous three-letter word. It’s hardly the most intellectual vocabulary, but it has more meaning than its passing nature suggests.

Urban dwellers most often run into the word on subway and train lines. “WATCH THE GAP” is written in big, bold, yellow letters on platforms. Heed warning — you might just fall.

Gap serves as a word of forewarning in soccer, too. It’s become almost cliché, a buzz word but nonetheless important. The closing “gap” has been a hot topic in international women’s soccer over the last four years, in particular how it relates to the United States national team.

The gap is gone.

Randy Waldrum, the head coach of the National Women’s Soccer League’s Houston Dash as well as the Trinidad and Tobago women’s national team who also recently coached the U.S. U-23 women, Notre Dame women and was a candidate for the senior U.S. team in recent openings, put it best at the NSCAA Convention in Philadelphia in January: “I used to say that the rest of the world is catching up. Well, you guys, they’ve caught us and they’ve passed us in a lot of countries right now with what they are doing.”

The closed gap has prompted change. U.S. senior women’s national team coach Jill Ellis said that when she took over the team last spring, she told the players, “If we sit where we are, we’ll get run over.”

On Monday the federation laid out its plans to better the development of its female youth players, a sector of the program receiving significant scrutiny as other countries around the world produce young talent making early jumps to the senior level. U.S. women’s technical director April Heinrichs says the plan is a long-term one.

The U.S. lost in the quarterfinals after struggling at times in the group stage.

Heinrichs admits “the ultimate American conflict, winning vs. development,” is always at play. In a panel at January’s NSCAA Convention, Heinrichs said that sometimes outside expectations for the U.S. women are unrealistic. On Monday she clarified:

Our goals are to win at every level. We train our players on how to win during the course of their development, from matriculation when we first bring them on as U-14s to when they matriculate through our program. We train the mentality of finding ways to win all the way through the program.

“Any time we enter a tournament we have to play to win, with the understanding certainly at our younger age groups when you go into say an international friendly tournament, that part of the process of developing is playing the players that we bring to a tournament. So you might mix your starting lineup a little bit. The goal is always to win, the goal is to find ways to win. The expectations in terms of our community and our fan base and even U.S. Soccer is to find ways to win, but we want to make sure that along the process, we are not sacrificing development pieces, like playing time, opportunity to play different styles of play, different opponents.”

A task force, led by chair and former U.S. international Carin Jennings-Gabarra, has analyzed the state of U.S. Soccer’s women’s youth development over the last four years and made three initial, overarching recommendations:

How will all of this be achieved? The federation is exploring the potential to create a 60-player national girls’ multi-age residency program in a city yet to be determined. The program would be for players age 14-18 and focus on developing the country’s best players into future national team players. It would be different from the boys’ residency program in Bradenton, Fla., U.S. Soccer president Sunil Gulati said.

This would pair with a girls’ development academy, which would target U-14, U-16 and U-18 league models.

And for the older players — where the gap is most recognizable — U.S. Soccer is making an effort to have the best 18-23-year-old college players placed in National Women’s Soccer League environments during their long NCAA offseasons to give them more year-round meaningful training environments.

U.S. Soccer identifies this age group as “a major development gap.” In Europe players are professional by their early 20s. In the U.S., they play college soccer. There are rare exceptions, most notably Lindsey Horan passing on a scholarship to North Carolina to play professionally for Paris Saint-Germain.

Heinrichs says that on average, it takes 5-8 years for a U-20 U.S. player to make the senior team. The very special talents — Morgan Brian and Crystal Dunn being recent examples — can make the jump in about a year.

[MORE: Undrafted players look for shot in NWSL  |  Inside the draft]

All of this comes at a time when the U.S. women’s youth national teams find that, like with the senior team, the gap has closed. 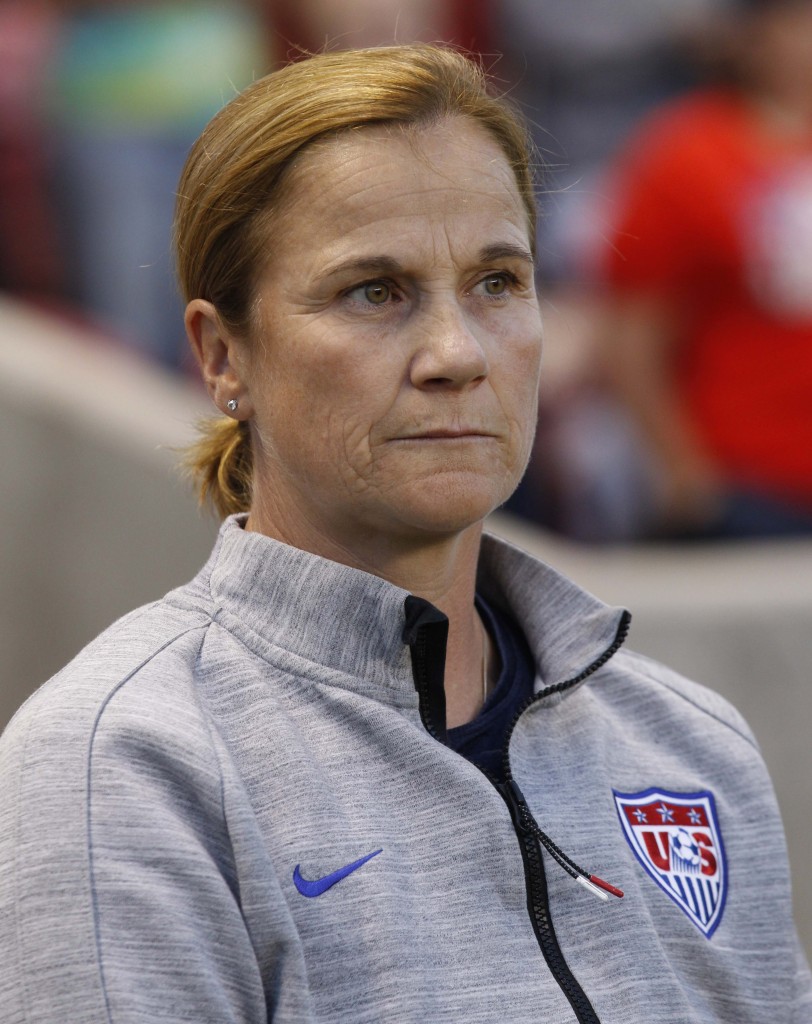 Jill Ellis says the U.S. must continue to evolve its style of play. (Getty Images)

In December the United States women lost their No. 1 world ranking for the first time in almost seven years. The rankings are arbitrary and the change in the rankings was a long overdue formality. But it was more tangible evidence that the once world-beating U.S. women no longer sit on a perch in the international game. An inexplicable 5-3 loss to Denmark earlier in 2014 emphasized that, causing a chain reaction that helped bring U.S. Soccer to this week.

The U.S. Under-20 women’s team lost in the quarterfinals on penalty kicks in an uninspiring 2014 World Cup campaign — a replica of 2010 — but the team also won the competition in 2008 and 2012, leading Gulati to say that there is no trend there.

But the U-17 U.S. women failed to qualify for two of the last three World Cups and did not make it out of the group in 2012, missing out on a three-way tiebreaker.

One of the biggest investments comes in staffing, which has grown from zero full-time women’s youth national team technical staff members to 11 in 2015. Heinrichs was appointed to her position in 2011, when Ellis was named women’s development director (U.S. Soccer said when Ellis was announced as national team coach that she had relinquished the duties of women’s development director). Added along the way were B.J. Snow as U-17 women’s coach, Michelle French as U-20 women’s coach, a head of women’s scouting, a women’s sports psychologist, three women’s developmental coaches and in 2015, a fourth development coach and a women’s goalkeeper director.

U.S. women’s youth programs will also move to birth-year specific programming in 2015. That will include playing more international youth matches, something Heinrichs said the U.S. lacks in comparison to Europe. The U.S. will host two annual youth tournaments, one of which is the upcoming U-17 tournament in Carson, Calif.

U.S. Soccer will also look to improve its coach licensing program and in 2015 will launch a digital coaching center.

How all parties come together on these plans could be one of the most interesting spaces to watch. Gulati said U.S. Soccer has a good relationship with Elite Clubs National League (ECNL), the highest level of girls youth soccer in the U.S. and a model that loosely replicates the boys’ U.S. Soccer Development Academy model.

Collaboration with the NCAA to better the college soccer model is also imperative and it comes at a time of potential change for the college game. A widely publicized proposal is on the table to shift men’s college soccer to a September-to-May schedule with a winter break, a change that would ease the awful fixture congestion in the college game — which often involves three games in a week or two games in three days — and put more emphasis on training and development.

The initiative is being driven by men’s soccer coaches and officials, but it’s widely assumed by those involved in women’s college soccer that they would follow suit. Gulati says he and Heinrichs met with about a dozen of the top women’s NCAA Division I coaches at this year’s NSCAA Convention and there is support for the what the men are doing.

In June the U.S. women embark on their journey to capture a World Cup title for the first time in 16 years.Gulati says winning the World Cup is important, but he still believes the U.S. is the best program in the world, “top to bottom.”

How all of these initiatives will improve the U.S. women’s program at all age levels is a question that will require years to answer. The closing gap and warning signs over the years make it easy to view these moves as reactionary as so many other countries continue to push forward in their development of women’s soccer.

“The long-term trend is that there are a lot more teams around the world – a lot more federations – spending time, money and resources on the women’s game,” Gulati said. “That’s a positive thing. So achieving those sorts of results – winning every time – just isn’t practical.”

There lies the ultimate American conflict: Win now or develop for the future? Both is the obvious answer. It’s a question which answered as the former was the impetus of Tom Sermanni’s shock firing last year as the U.S. zeroed in on the 2015 World Cup. Monday’s announcement is an answer in the form of the latter. The dilemma isn’t new, it’s just more pertinent than ever in an evolving women’s soccer landscape worldwide.